My grandfather was a pastor. For nearly my entire life, he was my pastor. That is, until he died.

Called to the ministry long before he entered it, he had an anointing to heal. People from all over were drawn to his charisma, his grand personality. He was a strong man in ideals and in faith. When he passed away, another minister preached—yes, preached—at his funeral. A room full of people from every facet of his life, both from church and work, heard this pastor speak of the mantle that would now be passed on. Like Elijah to Elisha, the anointing of Papa’s ministry would pass on, but not just to one person. It would spread. The foundation that he laid would not go to waste. The ceiling of his ministry would become the floor for those who would follow in his footsteps.

What is the significance in those who have gone before us?

All through the Bible, God is referred to as the God of Abraham, Isaac, and Jacob (Israel). It was recognised that the men who had gone before had a certain relationship with God. It was generational. And it was important to remember.

…the God of your father… 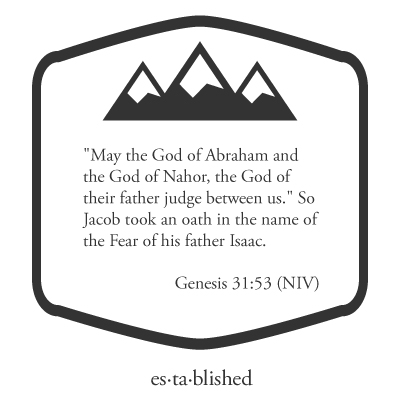 In two chapters of Genesis, there are no less than four examples of God being referred to as the God of a generation passed. Why?

Because God made promises to Abraham and to Isaac. Over and over again, God had proven himself faithful to Jacob’s father and grandfather. In his persistent reference to the God of his fathers, he reminded himself of those promises and that faithfulness.

We may throw away many things from the previous generation, but one thing that should never be set aside is the faith—the God—of our fathers. I don’t for one second take for granted the spiritual foundation that my grandfather laid. I know that he prayed for every person in his family by name every day. He prayed for me. I know that his work and his prayers were not in vain. I know that the relationship with God that I enjoy today has a lot to do with the relationship he had with God while he still walked this earth.

If you are fortunate enough to belong to the God of your fathers, don’t take it for granted. Look into your heritage and see the promises and the faithfulness.

If you are the first in your line, lay the foundation for future generations. Be the Abraham in your lineage.

Let us never forget the God of our fathers.

One thought on “The God of my father”