Have you ever known someone who refused to watch a G-rated movie because that stuff is juvenile? It’s fluff. It’s meant for kids. I’m above that sort of childishness. Well, I guess the Gospel is too juvenile as well, because Jesus made sure that his message was suitable for all audiences. It was actually aimed toward the less learned. 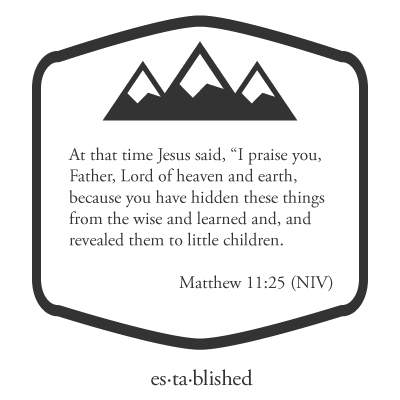 Jesus stood strong in the face of the religious and welcomed the children to him. He acted in direct contrast to the culture of the day appealing to the weak and simple. His Gospel, while suitable for all audiences, was better received by those who had no claim to knowledge of the law.

Aside from sin, the thing that can restrain us the most from receiving from God is ourselves. Our big brains and so-called wisdom clog our mind with complex ideas that Jesus never presented. Like the Pharisees in the days of the disciples, we see ourselves as being above such simplicity. And Jesus praised God that He chose to reveal his truth to the young and the simple rather than the wise and learned.

The Gospel of Jesus Christ is simple enough to be received by children and enduring enough for the aged. It is deep enough to appeal to the learned and broad enough to be understood by the simple.

Rather than working from the top down, Jesus started at the bottom and worked his way up. Not because those were the only people who would listen to him, but because it was his Father’s will that he do so.

Yes, Father, for this was your good pleasure.