A look at any news outlet these days will let you know that there are an awful lot of people who have no hope. Even those who think they do, don’t. This is nothing new. Hopelessness has plagued the human race since the very first humans walked the earth. Our own weaknesses and insecurities often overshadow anything or anyone who may be able to shine a little light into our lives.

This is what the Jews were feeling in the time of Jesus’ earthly ministry. The Pharisees had interpreted the law to a point that there was absolutely no hope in ever being able to keep it. In the first few verses of Matthew 12, we find Jesus and his disciples accused of breaking the law simply because they were hungry. If the need for a midday meal was enough to break the law, how much more did the Jews struggle in their daily life to keep up with the strict parameters the Pharisees put on them?

Yet Jesus fought against these man-made restrictions. While still keeping the law, he explained the freedom in it. Certain exceptions could be made within the boundaries of the law. Jesus emphasized his point by healing a man with a withered hand. The Pharisees considered healing work and thus, decided it was unlawful to do so on the Sabbath. Jesus, on the other hand established that it is lawful to do good on the Sabbath (Matthew 12:12). 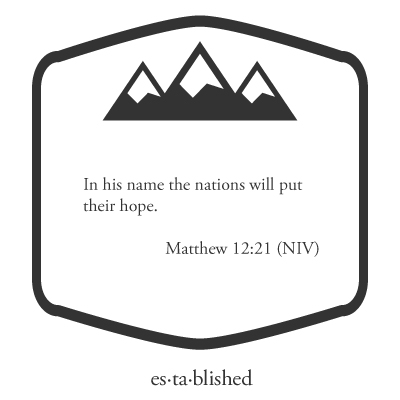 Jesus’ ministry was not to publicly put the Pharisees in their place, but rather to show the average person that there was hope beyond what they’d been taught. Their faith wasn’t all about the rules, but the freedom that could be found in them. The law was not given to stifle humanity, but to benefit them. And Jesus, in fulfilling the law, came to do the same.

Where there is no hope, there is Jesus. Where hope has faded, he brings a new hope.