My great-grandfather was a gentle man. He loved his wife and his family. He worked hard to provide for them. He loved God. He stuttered. His speech impediment often prevented him from sharing what God had done in his life. That is, until he died. At the age of 80—when most would say he’d already lived a full life—he had a heart attack and was pronounced dead. But that wasn’t the end. In that moment of death, he had an experience with God that would shape the rest of his life. Yes, the rest of his life. After his death experience, God brought him back to his family to live another 13 years. His mission: share his story. No stutter would stop him from telling anyone who would listen the story of what God had done for him.

Gramps reminded me of Moses—not that he lead a great people out of slavery or that he held out his staff and split a river, but God knew what He was doing when He created both men, speech impediments and all.

Moses said to the Lord, “O Lord, I have never been eloquent, neither in the past nor since you have spoken to your servant. I am slow of speech and tongue.

If I were to tell you that you’ve insulted God, you may be insulted by my statement. But if we were to be honest with ourselves, we’ve probably all made that same grave mistake. Moses did it and angered the Lord and all he did was make a truthful statement. God wasn’t impressed with Moses’ excuse of not being eloquent. 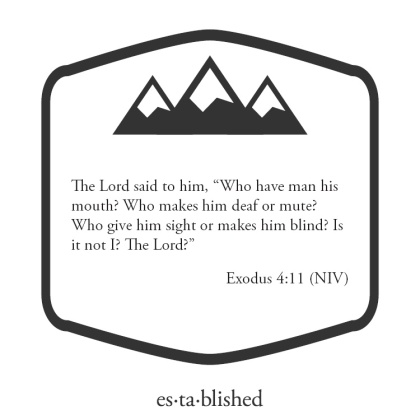 Let’s say that you’ve been asked to work out a solution for a particular problem. You work hard and come up with a design that you know is absolutely perfect for the situation at hand. Then someone comes along and tells you that it isn’t good enough.

How do you think God feels when we tell Him that we aren’t enough for what He wants us to do? He made you. He made me. He knows exactly who we are and what we are capable of. Don’t you think He’s already taken into account what we can and cannot do? Do you really think He would ask someone to do something if He didn’t already know that person could do it?

As far as we know, Moses never got over his lack of eloquence. His brother, Aaron, was his mouthpiece. Yet Moses was still able to lead his people out of Egyptian servitude. He led them across the river and right to the border of the Promised Land.

How ignorant we can be in thinking that God left us lacking in any way. Where we are not enough, He is more than enough. Where there are gaps, He fills them.

“Now go; I will help you speak and will teach you what to say.”