Have you ever had to ask forgiveness? Wait. That’s a silly question. We all have. And if you haven’t, I guarantee that you probably should. We’ve all done things to offend someone. We will all do things that will offend someone. When that happens, we all want to be forgiven. No one wants the weight of wrongdoing hanging over their heads—at least I hope not.

Not only do we all need forgiveness, but we’ve already received forgiveness. In the moment that we receive Jesus into our lives as Lord and Saviour, God forgives us. But what does that really mean?

FORGIVE: To pardon; to remit, as an offense or debt; to overlook an offense, and treat the offender as not guilty. The original and proper phrase is to forgive the offense, to send it away, to reject it, that is not to impute it, [put it to] the offender.

It is our sin that separates us from God, but when we ask Him to forgive us, He separates our sin from us. It is no longer ours. It has been sent away. Rejected. And because of that, we are expected to do the same for others. In Matthew 18, Jesus tells a story to help us understand how this works.

A king wanted to settle accounts with his servants. There was a man who owed him a great deal of money and was not able to pay. When the man begged to be permitted to leave, the king forgave the man his debt and sent him on his way.

When that same man who had begged forgiveness was approached by another man who owed him, rather than extend a small amount of the mercy he had been granted, he had the man thrown into prison until the debt could be paid.

When the king heard this, the man was brought before him, called wicked, and was turned over to the jailers to be tortured until his original debt was paid in full. 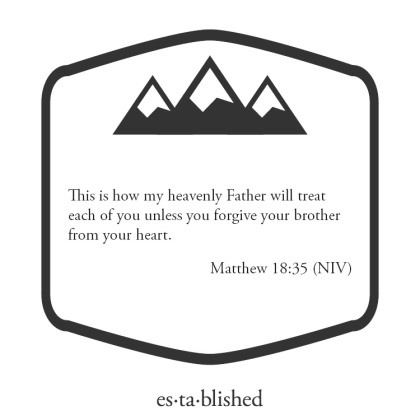 Words are cheap and easy. Anyone can say that they forgive someone. The hard part is acting like it, but that’s where the forgiveness really is. The best place to start to learn to forgive is to learn to act like you’ve been forgiven.

The wicked servant in Jesus’ story never took to heart the gravity of what he’d been given. If he had, it would have been easy to offer just a small portion of that to another person. When we learn to truly accept just how much we been forgiven of, we can learn to take that grace and extend it to others.

It is not until both your words and your actions line up that you can truly learn to forgive from your heart.