In honour of the fourth of May—what many have come to know as Star Wars Day, let’s talk about the Force.

The act of living generates a force field, an energy. That energy surrounds us; when we die, that energy joins with all the other energy. There is a giant mass of energy in the universe that has a good side and a bad side. We are part of the Force because we generate the power that makes the Force live. When we die, we become part of that Force, so we never really die, we continue as part of the Force.

In the Star Wars films, the general farewell between Jedi knights is, “May the Force be with you.” In Christian terms, “Go with God.” While George Lucas’ epic story between good and evil, light and dark isn’t a Christian story, it doesn’t mean that we can’t look at them through the filter of Word of God. We can liken the Force to the Holy Spirit. But rather than we become a part of it, the Spirit becomes a part of us.

When the construction of the temple was complete, Solomon dedicated the building to the glory of God. He goes on to bless the people of Israel.

Praise be to the Lord, who has given rest to his people Israel just as he promised. Not one word has failed of all the good promises he gave through his servant Moses. May the Lord our God be with us as he was with our fathers; may he never leave us nor forsake us. May he turn our hearts to him, to walk in all his ways and to keep the commands, decrees and regulations he gave our fathers. And may these words of mine, which I have prayed before the Lord, be near to the Lord our God day and night, that he may uphold the cause of his servant and the cause of his people Israel according to each day’s need, so that all the peoples of the earth may know that the Lord is God and that there is no other. But your hearts must be fully committed to the Lord our God, to live by his decrees and obey his commands, as at this time.

In short, “May the force be with you.” Solomon’s prayer was like Yoda reminding Luke to trust the Force, to feel and see the Force in everything around him. Solomon encouraged Israel to remember who brought them to the place where they now stood and to fully commit themselves to the One who caused it all to happen.

Solomon’s prayer is one that we can pray for ourselves, our families, and our churches every day. Turn to God. Walk in His ways. Keep His commands. Fully commit to the Lord. All of this is made possible through the aid of the Holy Spirit which was sent to us for that purpose. The Spirit, like the Force, is there for our benefit. He makes great power available to us and helps us to do that which we are called to do.

So go out, walk in God’s ways. Get yourself in tune with the Holy Spirit.

May the Force be with you.

In a world where everyone wants something to matter, there are a few things that don’t matter at all when it comes to our Commission as believers.

1. It doesn’t matter where you are. 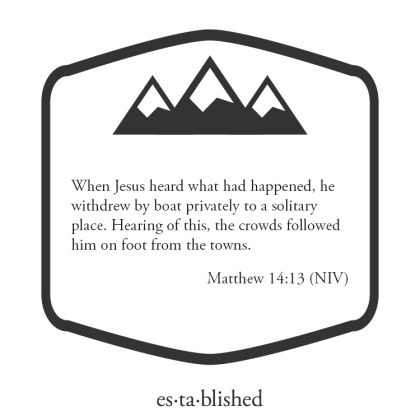 Bono had it right when he penned these words:

We can get so caught up in our doing that we don’t notice that Jesus has gone somewhere else and we’ve failed to follow. The crowds that followed knew that Jesus had something they needed. It didn’t matter that he was in a boat and they were on land. They followed.

There are times that we may be hesitant to leave what we’re doing because we have so much time, energy, and resources invested. But is it really worth missing Jesus? We must all learn to keep our eyes on him and follow at a moments notice.

2. It doesn’t matter how you feel. 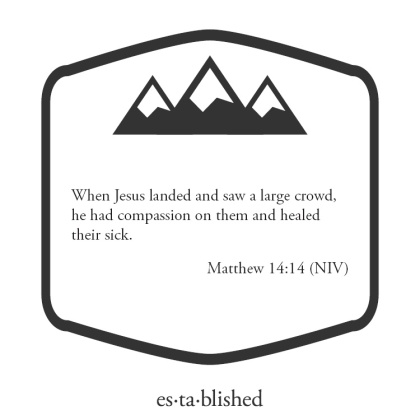 Jesus had just received news that his cousin, John the Baptist, had been beheaded in prison. He wanted to be alone. Yet the crowds followed him and, even in his grief, he had compassion, ministered to them, and healed the sick. Whether we feel like it or not, our call to minister doesn’t go away or get put on hold. Jesus didn’t say, “When you feel like it, maybe go across the street and tell someone about me.” He said, “Go into all the world and preach the good news to all creation.” (Mark 16:15)

How we feel is not included in our call. In the following verses we will see that, even in one of his darkest moments as a man, Jesus was able to perform a great miracle and reach thousands of people. Perhaps by going ahead, especially when we don’t feel like it, God is able to accomplish more through us.

If you’re a pastor or a leader in your church and 10,000 people show up one Sunday and want to stick around all day, what would you do? Feed them or send them off with an invitation to return and hope they’ll come back? If the disciples had their way, they’d have sent away the crowds. Their hands were empty. Jesus had been performing miracles all day and the men who were closest to him still didn’t see that just because their hands were empty, it didn’t mean they had nothing.

Whether we feel qualified or equipped to fulfill the Great Commission is irrelevant. What’s in our hands doesn’t matter. It’s probably even better if our hands are empty because then we have no other recourse than to depend on what’s in Jesus’ hands.

When Jesus handed off the bread and fish to the disciples, they then handed it off to the people. And then it came back—far more than what they’d started with. Every hand that touched the food was a part of the miracle and as more people handled it, the greater it became.

The message of Jesus is completely counter to our culture. We cannot maintain popular ideals and still be effective in ministry.

But there is someone who truly does know exactly how you feel.

Since he himself has gone through suffering and temptation, he is able to help us when we are being tempted.

In order to be the perfect sacrifice for all of our sin, hurt, and pain, Jesus had to have been exposed to everything we are exposed to. The only difference it that, he didn’t deserve any of it. So that he could be the one to legitimately express that he knows exactly how you feel, he went through it all. For you.

While you may not find much comfort in a stranger or even a friend offering sympathy, find comfort in Jesus. He really does know how you feel and, because he knows, he also made a way for you to get through it. Whatever your struggle is—sin, addiction, pain, mourning, sickness—Jesus is the one who can bring you through when no one else can. He knows how you feel.

Thank goodness it’s not based on feelings. Not even a little bit!

My righteousness has absolutely nothing to do with how I feel or what I do to try and become righteous. While in the Gospel of Matthew, Jesus tells us to let our good deeds shine out for all to see, those good deeds to not make us righteous. So what does?

And Abram believed the Lord, and the Lord declared him righteous because of his faith.

It’s almost difficult to believe it’s that simple. Believe. Have faith. Done. Because of his faith. Nothing more. God didn’t demand that Abram do all sorts of things to become righteous. Abram’s belief in God and his faith in Him were enough.

Today, don’t worry so much about how you feel when it comes to salvation and righteousness. Believe. Have faith. Let God take care of the rest.

It seems, more and more, that our culture is moving away from the feeling of shame. No one should ever have to feel bad for anything they’ve said or done.

While I agree that we should not be going around pointing fingers at each other, there is a reason and even a benefit to shame. There are reasons why some win and some lose.

Let’s first look at what shame really is.

SHAME: a painful sensation excited by a consciousness of guilt, or of having done something which injures reputation; or by of that which nature or modesty prompts us to conceal.

In other words, shame is something you should feel when you’ve done something wrong. Even Christians have somehow taken this twisted world view expressing that we shouldn’t feel bad.

If you’ve sinned, you’re guilty. There’s no reason to hide from that fact, but the truth that we can run toward is this – that God does not condemn us when we come to Him in repentance.

For God has done what the law, weakened by the flesh, could not do. By sending his own Son in the likeness of sinful flesh, in order that the righteous requirement of the law might be fulfilled in us, who walk not according to the flesh but according to the spirit… But if Christ is in you, although the body is dead because of sin, the Spirit is life because of righteousness. If the Spirit of him who raised Jesus from the dead dwells in you, he who raised Christ Jesus from the dead will also give life to your mortal bodies through is Spirit who dwells in you.

Though sin leads to death, those who are in Christ have been set free from it. What better reason is there to run from the bondage of sin than to run towards the freedom life?

If you spend any time at all on social media, you will eventually see something about shaming. Passenger-shaming, drink-shaming, body shaming, and more. While some believe it is their God-given right to shame whomever they wish, there are also those who believe that no one should feel any shame at all. Where is the line?

As he said these things, all his adversaries were put to shame, and all the people rejoiced at all the glorious things that were done by him.

I believe shame to be useful as pain is useful. Do we want to feel it? Of course not! Should we feel it? Perhaps.

Like pain, shame often tells us that something is wrong. When Jesus continued to perform miracles on the Sabbath, the rulers of the synagogue were indignant. Apparently performing miracles was considered work. Jesus then proceeded to explain his reasons and the men of the synagogue were put to shame. They used religious excuses to avoid doing the real work they were called to.

I don’t think Jesus’ intent was to make them feel like horrible people, but rather to use their shame as a tool to correct wrong thinking.

The next time you feel ashamed, take a moment to think about the reasons why. Rather than becoming angry and indignant to try to make yourself feel better, use that feeling as an indicator. Like pain tells us that something is wrong, shame can work the same.

Didn’t Jesus come to take away shame? Yes, He did! But He also told us to turn away from the things that bring us shame.