Up here, in the Great White North, we like curling. Not our hair. The sport. If you’re not familiar with it, here is a brief explanation. If you’re from a land of indoor or summer sports, curling is the winter version of shuffleboard or bocce ball. One addition is brooms. Yes, brooms. A large, and very heavy, polished stone is pushed down a sheet of ice. A sweeper (or two) then sweep a little (or a lot) depending on how the rock was thrown. More importantly from clearing any debris from the ice, the friction, and subsequent heat created by sweeping can actually change the speed and direction of the stone as it glides down the rink. A common command for more vigorous sweeping is, “Hurry hard!”

While I’m quite certain that curling did not exist in ancient Canaan, I am certain that God intended for His people to do a quick and clean sweep of the land ahead of them.

Speak to the Israelites and say to them: “When you cross the Jordan into Canaan, drive out all the inhabitants of the land before you. Destroy all their carved images and their cast idols, and demolish all their high places.

You see, in order to fully possess the Promised Land and maintain said possession, Israel was commanded to sweep it clean. The quality of their sweep held the potential to change the direction of an entire nation of people. Like curling without sweeping isn’t really curling, possessing the Promised Land in any other manner than the one prescribed by God isn’t really possessing.

The same goes for our lives. When we give our lives over to God, He wants everything. Everything, everything. Even those little things that we say aren’t harming anyone. He wants us to do a clean sweep so that our lives can change direction.

And, He doesn’t want us to do it a little bit at a time. We need to hurry. Hard. Notice that God’s command said, “When you cross the Jordan into Canaan, drive out all the inhabitants of the land before you.” God knew that if they waited to get rid of the pagan filth of the Canaanites, they would never get rid of it all—which is exactly what happened.

We cannot expect a different outcome than the Israelites. If God’s chosen people, those He had cut a covenant with, would not be spared just because of who they were, what makes us think we’d be any different? If we, like Israel, refuse to rid our lives of all sin, we cannot expect all of the victory, either.

But we don’t have to do it alone. 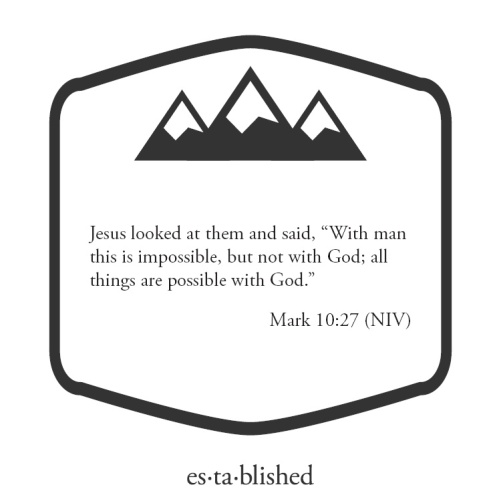 Jesus didn’t just throw out this statement as though God were a great magician, able to conjure up anything we wish. He was talking about salvation, being able to leave our old lives behind to walk on the new path before us.

Even though they gained their Promised Land, Israel didn’t fully succeed in the plan God had for them. They got lazy and complacent once they reached their final stop. Perhaps all they needed was a skip hollering from the other end of the rink. Like ripping off a bandage, the faster you accomplish the task, the better. It may hurt more in the moment, but it will only last a moment.

So when it’s time for you to sweep something out of your life, don’t wait. Hurry. Hurry hard.